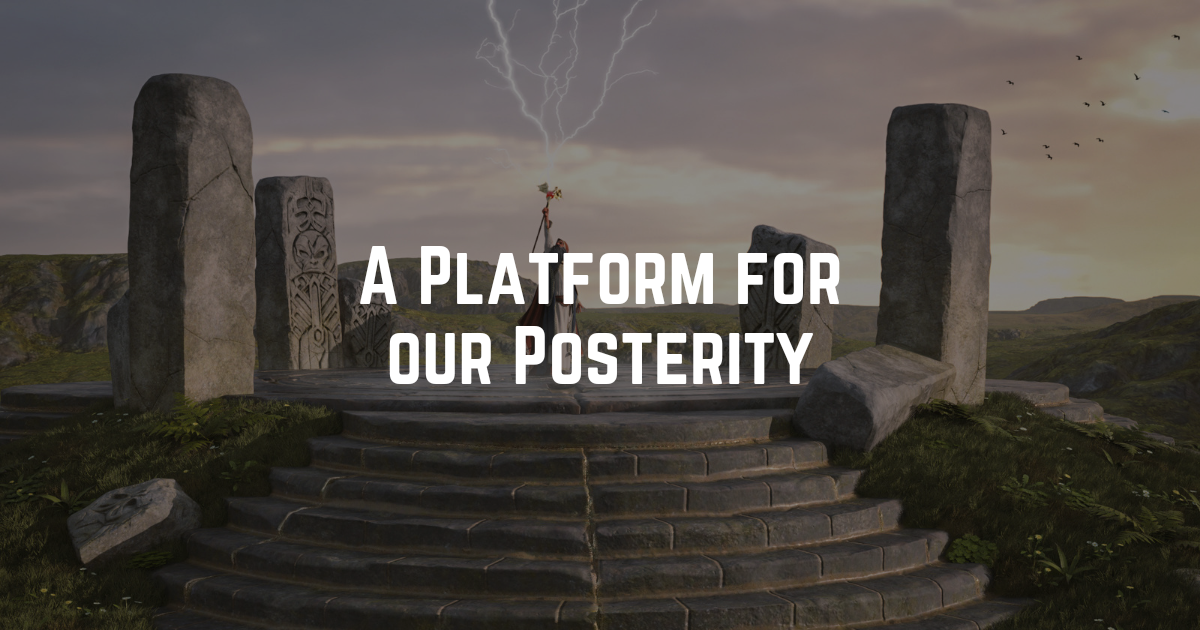 Our founders gave us the Constitution and ownership of a nation.  We can give our children ownership of the media and fulfill the idea of liberty in this digital age.

We can give our posterity a tool we never had – their own social media, news, and digital publishing platform — complete control of the media.

Imagine a platform as big as Facebook, Twitter, Amazon, or Google, only owned by the users themselves. This is not just pipe-dream — it is now more possible than ever.

The implications of the existence of such a platform are monumental. For one, it would completely end the current monopoly big tech companies have over the media and free speech. Since every user owns the ad-value of their own space and feed, no one entity could ever swing an election, cause a certain point-of-view to be exalted over another, or decide what gets promoted or what gets censored. It would be a true marketplace of ideas and views, the popularity of which would be won on the merits — rather than by the agendas of the owners.

Such a platform would also give the people more control over governments, because politicians and government officials would have to appeal to the audience of this platform rather than the company in control of it. No more would elections be manipulated by trolls or social movements unless they are supported by the majority.

This platform would also release billions into the economy by taking current ad revenues from the coffers of the extremely wealthy social media magnates and placing it in the hands of the influencers, creators, and users, who, in turn, would be able to start and grow more businesses, hire more employees, and make more purchases — all the positive effects of true capitalism. It would also reduce the cost of many digital products and services by completely cutting out the middle-man, making education and knowledge more accessible to millions.

Even books and movies could be created by anybody with a smartphone and monetized for their ad-value rather than for an up-front price, thereby ending the monopoly of e-book monopolies like Amazon and Kindle; and the indoctrination of Hollywood over our imaginations.

Development will utilize new modular methods, which will also make the features of the platform itself more open-source and extendable.

Wikacy is a microcosm of this idea, being the only app in the world which monetizes for the user first. Sure, we will face much opposition from those who profit from the current monopoly; but if enough freedom-loving people grasp this dream and start writing on this platform, it won’t be long before this concept goes viral, despite the opposition.

So, if you believe in this dream, start writing, sharing, and spreading the word. Remember, you earn 100% of the ad-revenue from ads displayed under and within your content. Each month you will be emailed a detailed breakdown of your earnings; and you can withdraw your funds whenever you like. There is no minimum payout. Very soon, you will have a built in dashboard with complete analytics.

You can also sell your own ads. Our post form allows html, scripts, and media. Get creative in your marketing to potential advertisers. As we grow, the value of your content will grow as well. As you begin to publish stories on a regular basis, we will help match you with your own advertisers and sponsors.

Our founders gave us the constitution.  They placed the ownership of this nation in our hands.  We can do the same for this new digital nation. We can give our posterity their own platform; and more freedom and liberty than we ever had. In fact, this may be the only way to protect their freedom of speech.

Lets get it started on this very blog.  What do you want to share with the world?

Go ahead — write your part of the new revolution.