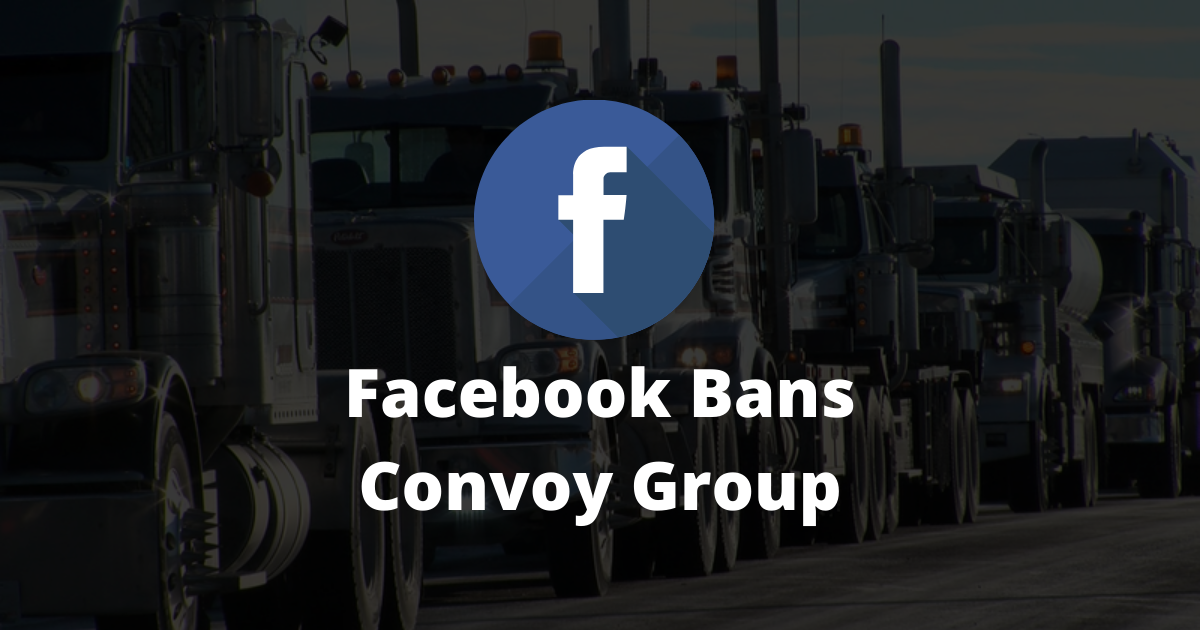 The tech giant shuts down another grass-roots movement of the people.

Facebook has booted the rapidly growing “Convoy to DC 2022” group from its platform after it gained 137,000 members.

The group had been gaining tens of thousands of members per day and was calling on all truckers in the US to form a convoy to protest COVID-19 mandates. Organizers were planning to begin the convoy in California and end in Washington DC.

According to congressional candidate Tyler Lee, who was helping organizers of Convoy to DC 2022 and was planning to join the convoy, Facebook claimed that the group was banned for “repeatedly violating our policies around QAnon.”

However, Lee described Facebook’s actions as a “stunt” and added that this “is exactly why Americans are fed up.”

The QAnon policies that Facebook cited when banning Convoy to DC 2022 were blasted when they were first introduced with lawyers, journalists, and authors warning that they were arbitrary and gave Facebook an unchecked license to censor.

“Facebook just shut down our page,” Brian Brase, one of the organizers of Convoy to DC 2022 tweeted. “Apparently we don’t fit their agenda. People United is scary I guess. Convoy is still on.”

Facebook’s decision to boot the Convoy to DC 2022 group follows another convoy that’s protesting vaccine mandates, the “Freedom Convoy” in Canada, going viral on social media after mainstream media outlets downplayed the convoy and suggested that Russia was behind it.

This isn’t the first time Facebook has banned a rapidly growing grassroots protest movement that’s being shunned or disparaged by the mainstream media. Anti-critical race theory groups, anti-lockdown groups, groups supporting exceptions to COVID vaccine mandates, and more have also been booted from the platform as they gain traction and attract lots of new members.

In addition to banning specific groups, Facebook has introduced new censorship rules that make it harder for group members to see each other’s content.

When will the people wake up and realize yet another tool made for the enhancement of communication has become another form of despotism.

More and more young people are deleting their Facebook Accounts and refusing to support the platform.  It is time for adults to do the same.

In an effort to stand up for what is right and for the principles of liberty, Wikacy App has deleted it’s Facebook and Instagram Accounts.

Whether more will join us is a matter yet to be seen.

ShareTweetSharePostSharePin It!
chevron_left Into Darkness a Vampirs Tale CH One
GoFundMe Steals with Impunity chevron_right