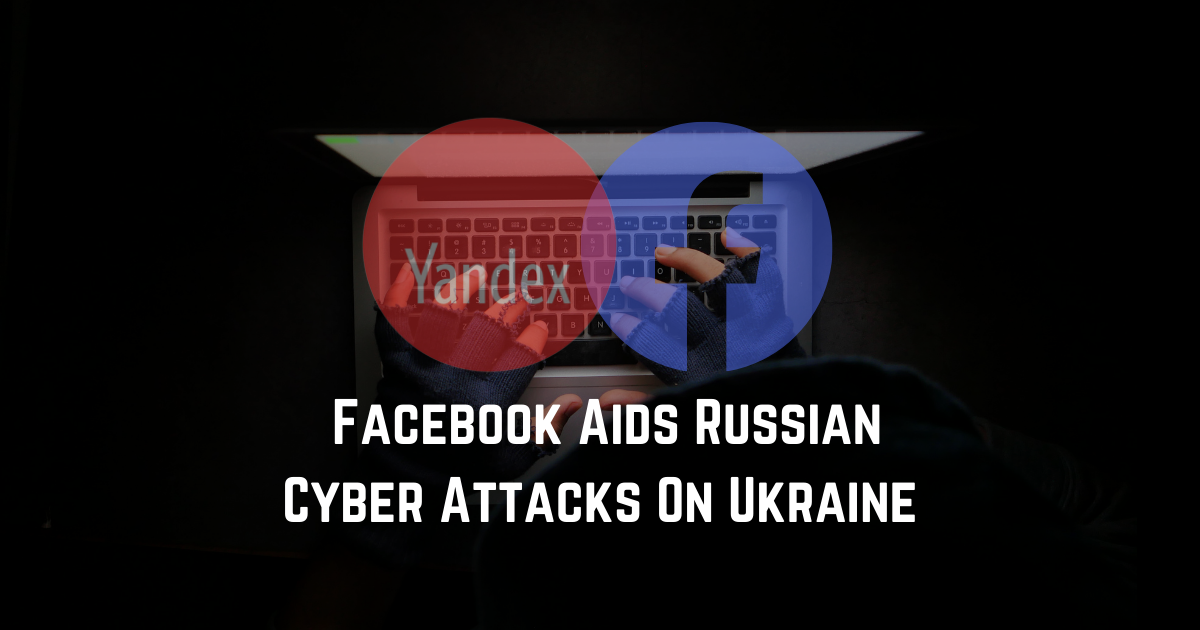 Yandex, a Tool of Russian Disinformation and Cyber Operations in Ukraine, is owned by Facebook via proxy

Sergey Sukhankin at the Jamestown Foundation, a global research organization, has been covering Yandex’s involvement with intentional cyber–attacks on Ukraine, Poland, and other independent European states for many years, and has even testified before the United Nations.

According to Sukhankin, In terms of the challenges to Ukrainian information and cyber security from Russian IT programs and software, Yandex may pose the greatest threat. Yandex has become the fourth largest online search tool in the world and enjoys unparalleled popularity in the post-Soviet space, with populations in Russia, Ukraine, Belarus and Kazakhstan being the main users. Multiple reports have alleged that the Russian special and intelligence services routinely use Yandex to “manipulate the collective and individual conscious of Ukrainian citizens” (Sprotyv.info, May 29). Reportedly, this is accomplished by implementing search tools and mechanisms that aim to prioritize anti-Ukrainian and anti-Western online content to Yandex’s Ukrainian-based users. Also, it has been argued that private Yandex e-mail accounts and other data passing through Yandex-offered web services are monitored and actively used by the FSB and Russian hackers to design effective cyber attacks against “critical infrastructure, public institutions and individuals.”

While Sukhankin seeks to expose Yandex for their many crimes, we have unveiled a much larger and more sinister plot.

On January 14th, 2014, Yandex announced that it was adding public Facebook data to the index of data mined for queries handled by the Russian Internet search giant.

“As of today, public content from Facebook users in Russia, Ukraine, Belarus, Kazakhstan, other CIS countries and Turkey will be available for indexing by Yandex as soon as it has been published,” Russia’s biggest search engine said in an English-language statement. Yandex said that an agreement with Facebook gives it full access to the California-based social network’s “firehose” of public data.

If this odd partnership between America’s largest social network and Russia’s cyber-military arm alarms you, get ready to be even more alarmed.

The two companies have been working in close cohort for many years (though they made a show of competing shortly before their public announcement, to manipulate prices, of course) and were joint shareholder/partners in Face.com, a facial recognition technology with very draconian capabilities.  In Russia, the tech is used to spy on political enemies.  It is the same system used on the Facebook Social Network and other apps owned by Meta Platforms, Facebook’s parent company.

It is general knowledge in America that the Russian government uses social media and internet communications to ensure the official narrative of the government is the only one disseminated.  They keep close control over the news and media outlets who publish online.  The government, in turn, assures Yandex maintains and strengthens their monopoly powers, helping them shut down small competitors and venture into new markets.

According to Sukhankin, the Kremlin has been investing heavily in putting the domestic Internet sphere (Runet) under direct government control and is attempting to subjugate the Russian IT and software industry to its own interests. The infamous “Shaltay Boltay affair” that made public a large tranche of e-mails allegedly belonging to Vladislav Surkov—the architect of the “Russian Spring”—explicitly showed the true level of dependence of the entire Russian IT industry on the FSB (see EDM, February 9). Also, recent remarks by President Vladimir Putin, comparing Russian hackers to artists and true patriots (RT, June 1), reveals the apparent attitude of the authorities in Moscow toward cyber crimes committed in the name of the Russian state. Jamestown Foundation.

Additionally, analyst have attributed the migrant crisis of Poland and the failure of Poland to free itself from Russian oil independence as the result of a very organized series of cyber-social campaigns and attacks orchestrated almost entirely on Yandex’s social media and search engines.

While it seems casual to contemplate the state of Russia, the current War on Ukraine, and other troubling human events, the fact that the same company responsible for implementing social tyranny and the suppression of free speech in Russia and abroad is the company who owns the most popular social network in America and the world.

The same company who has worked closely with the Russian Government to monopolize a wide-range of industries, from payment systems to gaming and even public transportation — and to suppress and completely shut down small family-owed businesses and human-rights supporters across the globe — is here in our country implementing the same algorithms.

There is no people more hopelessly enslaved than they who falsely believe themselves to be free.

ShareTweetSharePostSharePin It!
chevron_left The Quest Matters
We Are What We Buy chevron_right