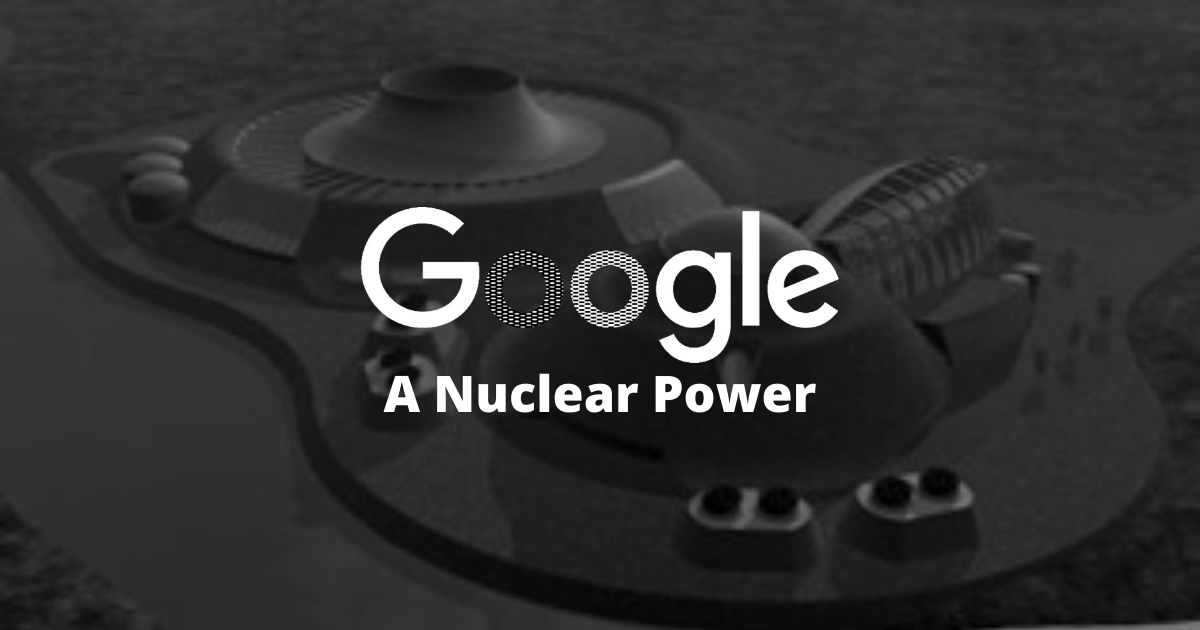 Google now owns the most advanced nuclear technology in the entire world.

You heard that right.

While everyone was focused on the proverbial circus maximus being fed by social media and the mainstream media, the true threat to humanity has taken it’s final steps towards world-domination.

Google has acquired a company that has created a new process for highly efficient isotope separation, we’ve confirmed from multiple sources. The primary use of this technology, say experts we’ve spoken with, is uranium enrichment.

Enriched uranium is a necessary ingredient in the creation of nuclear energy, and one source we’ve spoken with at Google says that this is part of the Google Green Initiative. The company will use the new technology to enable it to design and possibly build small, mobile and highly efficient nuclear power generators. “Google has already begun building an enrichment plant,” says a high ranking IAEA source.

As GreenBeat points out, “Google finally decided to launch a dedicated unit of the company for designing and building its own solar panels, wind turbines, energy efficiency devices, etc. So far, its green efforts have been pursued by separate projects within the company. Nuclear is an obvious next step for the company.”

But other sources we’ve spoken with say Google has no real intention of pursuing nuclear energy, despite the fact that the company has promoted the use of alternate energy sources for years.

Of particular concern is the fact that the company Google acquired is based outside of the U.S., and little is known about the new enrichment technology they’ve developed.

Nuclear power generation is a highly regulated industry. And enriched uranium is a particularly sensitive topic and creation and distribution of the substance is highly controlled.

Enriched uranium can also be used for nuclear weapons production, which is why the industry is so highly regulated.

Says one source: “The story Google is putting out there is that the new technology will be built for clean energy production. But all of the research and development they’re doing in this area is being conducted outside of the U.S., and the enrichment facility is also outside of the U.S.”

And more chillingly: “It would be trivial for anyone with this technology to build a nuclear weapon.”

Google, which has been shaken by its inability to counter Chinese censorship and hacking efforts, may be engaging in enrichment research as part of a new effort to simply protect itself from outside threats.

One source pointed out that if Google were its own country, its revenues would place it at 74th on the list of countries sorted by gross domestic product. “The U.S. government clearly won’t protect Google from China, so Google is taking the logical step of protecting itself with a physical deterrent.”

To be clear, most of this is speculation. All we’ve confirmed is that Google has acquired a company with a new enrichment process and that they have begun researching small, nuclear portable generators. But there is real evidence here that Google may be working on something much more sinister to counter the China threat. More as this develops.

As a final thought, it is also well-known Google has special protection from the government and provides much of the technology needed to power communication and at-sea fueling of U.S. Nuclear Submarines.

Why not one single media outlet ha covered this scary fact is obvious.

ShareTweetSharePostSharePin It!
chevron_left The Unsubscribe Script
John Battelle: The Stalin of Media chevron_right