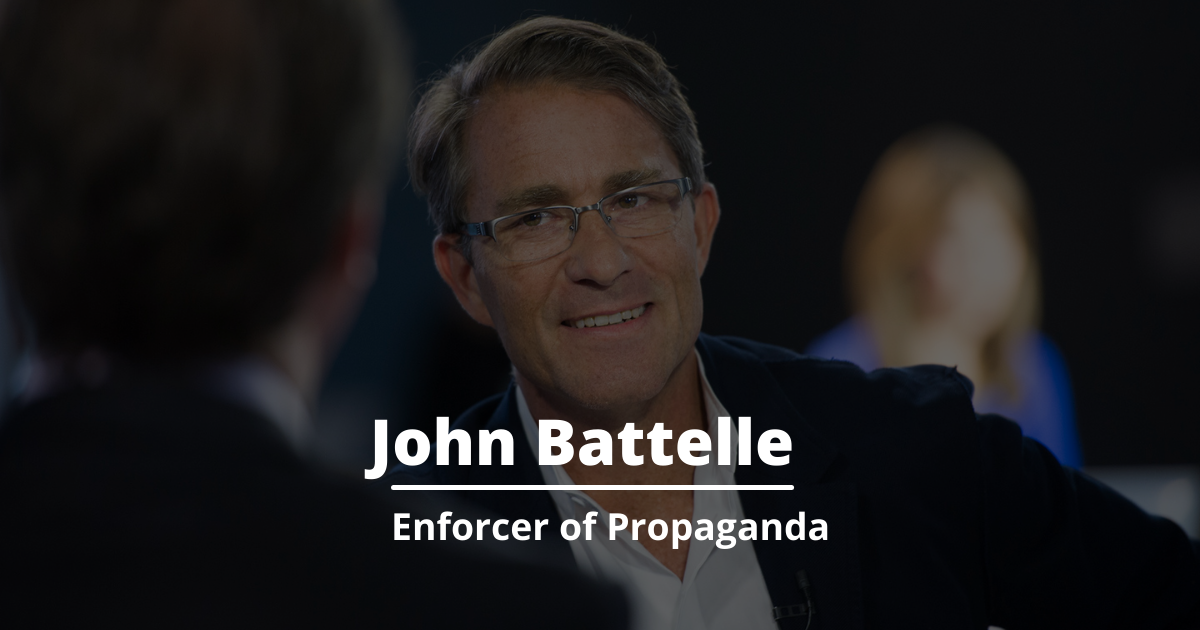 Every empire needs a minister of propaganda, especially a digital empire.

John Linwood Battelle, the founder of Sovrn Holdings, formerly Federated Media Publishing, is the man who controls everything you see and hear on the internet, whether you realize it or not.

Battelle was involved with the internet at its founding, and was a key player in the dot com boom of the 90s.  But it was his role as a professor of journalism at the UC Berkeley Graduate School of Journalism, where he also chaired the Bloomberg Chair on Business Reporting, which groomed him for his current role as information enforcer for the entire internet.

Who better to understand the ministry of propaganda than a journalist?

He later spearheaded two projects which would sharpen his skills, one known as The Big Story, an online magazine examining how the media covers major events, and, more interesting, China Digital Times, a bilingual news website aggregating news about China.

The former made him a great spin doctor.  Obviously, it was the latter which enabled him to learn all the tactics of censorship perfected by communist China.

In 2003, Battelle and publisher Tim O’Reilly founded the Web 2.0 Conference, which was later renamed the Web 2.0 Summit. Battelle called “this grandfather of Internet conferences” among his “proudest editorial works”. During its lifetime, from 2004 to 2011, he was the conference’s executive producer and program chair, and, with O’Reilly, its co-moderator. He shut down the event after 2011.

In 2005, Battelle began focusing on how popular blogs could earn steady advertising revenue for their work. After testing his ideas with the BoingBoing technology blog, Battelle founded Federated Media Publishing, which sells advertising space in a network of online properties, keeping most of the revenue and dishing out pennies to the site owners.  The following year, an Ad Age reporter wrote that some 85 high-profile blogs, including BoingBoing and Digg, had become affiliated with the company, “giving up a slice of their ad dollars for the exposure to the bigger advertisers and better rates that a bit of scale gets them”.

But it wasn’t his good looks which landed him such powerful sway.  As I will soon explain, he had powerful people helping him set up what is now the most intricate system of information control ever conceived.

When you sell your soul to the devil, Wall Street always backs you.  In 2011, comScore ranked the company among the top 20 United States Web properties; and The Wall Street Journal named Federated one of the top 50 venture-funded businesses.

Pay close attention as we trace the path of the snake.  Battelle sat on the board of the International Advertising Bureau  and has become a spokesman for what he calls “the Independent Web”: blogs and other semi-professional websites beyond Facebook, Twitter, and Google. He has argued that marketers are themselves content creators, and their marketing campaigns should be rooted in “their own domain, independent from any platform other than the Internet itself”

It didn’t take long for the big dogs to jump on board with the plan.

In 2005, Battelle published a book —The Search: How Google and Its Rivals Rewrote the Rules of Business and Transformed Our Culture.  The book described the history and impact of search engines and the late emergence of Google from a field of competitors. The book was an international best seller and finalist for the Financial Times and Goldman Sachs Business Book of the Year Award. The book has been translated into more than 25 languages.

And Google rewarded him.  Using his connections with Google’s vast database of advertisers as well as his influence in the field of journalism, the three powers began to contrive what is now the most powerful triumvirate of digital advertising in the world: Sovrn Holdings, the front organization for a secret cabal between CNN, Google, and Sovrn, which boasts of a list of advertising collaborators which could double as a who’s who of leftist-agenda-pushing companies.

As the platform which moderates the content their advertisers display ads on, it quickly began to strangle every website which did not fall in line with it’s leftist content-policies.

The overall effect was to force every website owner desiring to make an income from online publishing to either censor it’s writers or be left out in the cold.

This is the true motive behind all of the censorship we see online today.  While people may blame Mark Zuckerberg for the ridiculous “fact-checks” and other nonsensical censorship, the truth is, even Facebook has to tow the line.  The majority of Facebook’s data monetization, along with every other major platform, is controlled by John Battelle and Sovrn Holdings.

By the way, this is also the company which controls your online data, through a number of its partners.  Every time you visit a website using their system, every time you view a product, like a post, write a comment… Sovrn is selling that to someone.

If you do not push  their agenda, if you publish the truth, or if you are simply not a member of the club, you will not be able to succeed on the internet until we organize and take down this evil cabal.