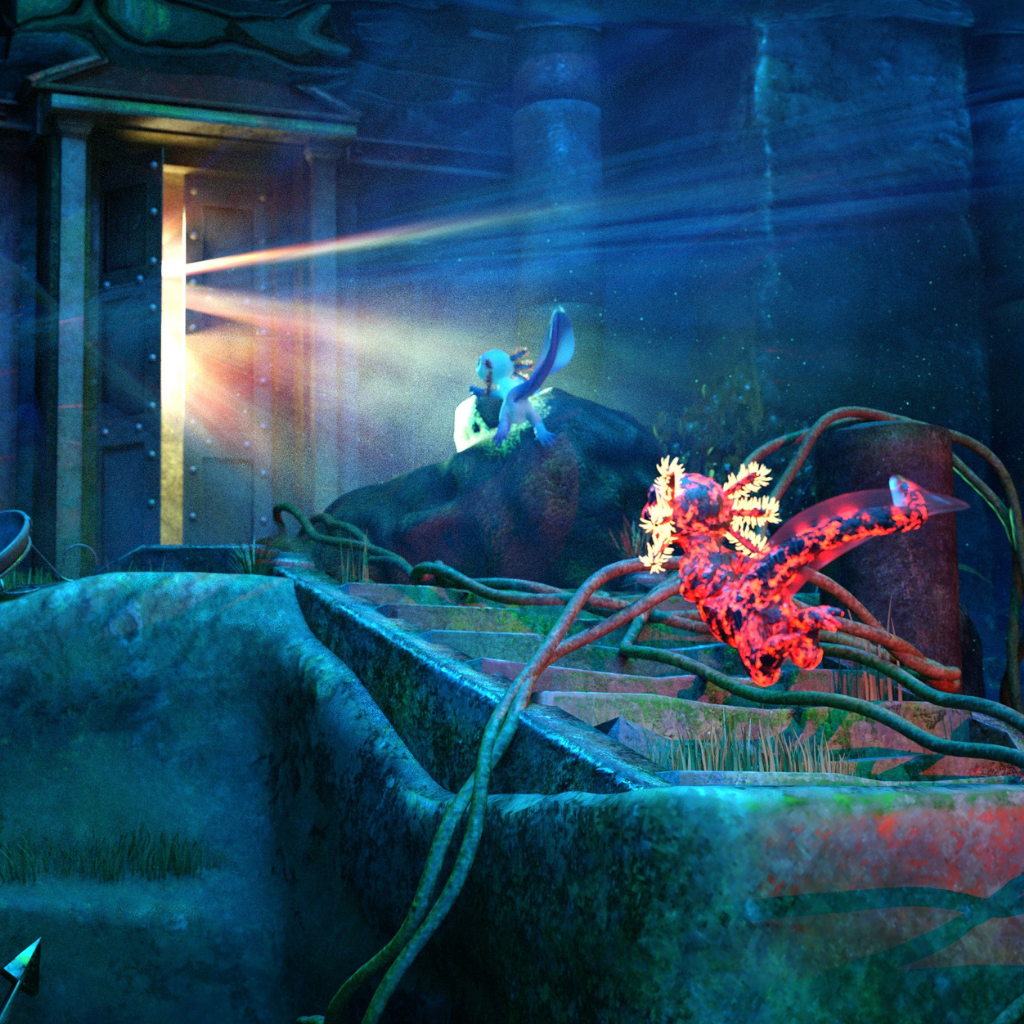 “Weeeeee…Keep up, Axol,” Teshi juked at her brother as the massive wings of her pigeon made another gigantic thrust, sending her, once again, into a jet whirlwind of the warm summer air.

They were both on the snail when they set out from the reef, but, as was her way, Teshi had commandeered the first easy going pigeon she saw. Teshi could never resist the urge to fly.

“Well, you could always hop on when I make my next pass!”

“Ah, no, Im good, actually.” Axol wasn’t one for heights. “You just go right on ahead. I will get there… eventually.’

They were headed for the harbor, where all the locals had gathered to discuss the strange shipwreck. The entire island was in an uproar about it. There had been shipwrecks on Axolotl Island before, but there was something strange about this one. All the elders had been whispering to each other back at the reef, and making strange eyes.

“I could have swore I heard them mention Daddy, Axol,” Teshi remarked.

“What would he have to do with this,” Axol jeered. “Dya think Dad is back?”

Chills ran down Teshi’s spine as she landed her pigeon near the edge of the treeline. Her and Axol’s father had disappeared a long time ago, since they both were too young to remember. It was a sore subject around the reef, and she did not want to stir any false hope in her younger brother, who was always more affected than she was, not having a father around, like the other boys. She regretted mentioning it as she saw Axol drop his head. “Come here, bubby,” she said, placing her arm around Axol’s shoulders. “I’m sure it’s just a boat-load of shrimp or something they are all excited about. Keep your head up, we are almost there.”

The beach was especially windy that morning, and the waves were crashing into the sand like thunder. The elders had all gathered in a little cove adjacent to the site of the wreck, and seemed to be hiding as Teshi and Axol approached. One of them spotted the kids and rushed over to pull them into the cove. It was old Mr. Skipper, one of the Reef Administrators. “Keep yourselves out of sight,” he admonished them. “There is someone, or someTHING, in there, and it’s alive.”

“It didn’t come from the water, no way,” said another.

Teshi and Axol were peeking around the corner of a large stone, trying to get a glimpse of the unusual vessel all the elders were making a fuss about.

“They’re right, Axol,” she cut her eyes at her brother, “look!” Axol inched his head slightly above the stone to have a look, but Teshi pulled him back down by his gills. “You have to keep your flappies down silly,” she cautioned him. “Like this.” Teshi demonstrated by rearing her gills down behind her ears with her facial muscles, causing her brother to smile.

“You look so funny when you do that,” he chuckled.”

“What are you kids doing,” one of the elders said. “Come away from there.”

Axol stole a quick look above the stone before backing down from the edge. What he saw caused his neck to tingle. Stuck on the reef, bobbing up and down with the waves of the sea, was a shiny, sphere-shaped vessel unlike anything he had ever seen…

It had transparent sections of some kind of glass installed around it’s perimeter, and a figure could be seen inside, slouched back on some sort of captains chair. Just as his eyes began to focus, the top cover of the vessel opened.

“Shhhh. Get down!” Axol crouched down low and skimmered over to where the adults were debating the next course of action. “Something’s coming out,” he whispered.

Old Skipper tip-toed over to the edge to have a look. “What are you doing? It will see you,” Teshi warned.

“Well, someone has to keep an eye on it,” Skipper replied. “Best if it’s me and not one of you kids.” He then peeked above the stone, peered out towards the wreck, then buggled his eyes as his head jotted to the right and the left, then shot back towards the rest of the group. “It just dove into the water!”

“What did it look like,” asked three elders, in unison.

“Strange. It looked strange, all’s I can say. Had some sort of protective suit on, like a diving suit.”

The group began to panic. “What if it’s heading this way,” one of them asked.

“We best scram,” said another.

The group needed no more convincing. They all rushed back towards the treeline, Old Skipper nudging Axol and Teshi along. Once behind the safety of the trees, they took council. After a brief debate, it was decided they should set up a camp on the adjacent hill, where they could have a clear view of the entire area, and continue to study the strange vessel and it’s captain.

Teshi and Axol couldn’t hide their excitement about these strange events. They wanted to go back down to the beach and investigate further, but they were warned not to leave the group without an elder. After helping with the camp, they found a nearby stream, which was close enough to still be considered within sight, and ventured down to it, pretending to bath as they discussed the situation among themselves.

“I can’t help but think about Daddy, Teshi,” Axol said. “What if all the stories ole Nan told us are true?”

“You know Nana is bonkers,” Axol. Plus, momma says nobody knows where daddy went. He could be.. ” Teshi stopped herself when she realized what she was about to say, but quickly corrected, “Looking down on us from heaven,” she continued.

Axol rolled his eyes. “Or looking down on us from where Nana says he is,” he cut back at his sister. The siblings had been enjoying their grandma’s stories ever since they were infants, even though, as they grew older, their mother had warned them about her mental illness. “Just take them with a grain of sea-salt,” she had warned. But even Teshi began to wonder if there was any truth to them, especially from what they had just witnessed.

Nana’s favorite bedtime story was the one about an ancient Wizard, who came to transport people into the realm of the stories they created during their lives. Since their father had been a famous storyteller, it followed that Old Nan concluded Daddy had been taken to outer space by the Story Travellor, because he had always told stories about adventures in outer space during his life. His stories were well-known around Axolotl Island, and many of the elders still repeated them. It was some consolation to dream that it would be possible to leave the island and experience the wonders of space, which, in reality, was not possible for an axolotl.

“I’ll tell you what,” Teshi began. “When it gets dark, and everyone falls asleep, we are going to sneak back down there and find out for ourselves.”

Axol’s sullen face transformed into a bright smile, and his gills poked up. “Now you’re talking!”