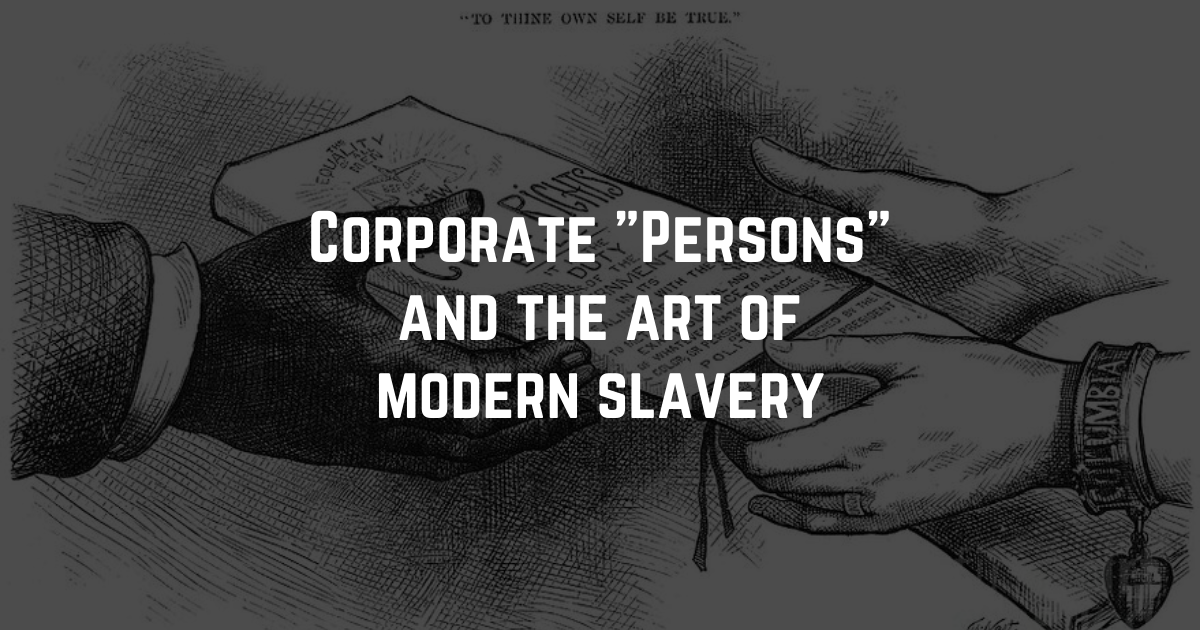 The Fourteenth Amendment did not “grant freedom to the slaves,” as most people believe.  Rather, being carefully combined with the Clearfield Doctrine and, later, the Federal Reserve Act, it enslaved us all.

Let me show you how.

Before the Fourteenth Amendment, there was no such thing as a United States Citizen.  People who lived in one of the several sovereign states of the union were considered citizens of that state.  We can also establish there was no such thing as “The United States,” because the union organized under the constitution was the “united states of America.” The difference between all capital letters and the use of title case (with only the first letter in each word capitalized) means everything under the law.

Slavery has always and will always be the most egregious violation of the rights of human beings.  The movement to end slavery was growing very strong during the years leading up to the civil war.  By hijacking this movement and using it for their own purpose, a group of corporations were able to set up a form of slavery which would, in the end, serve them much more efficiently than servitude in it’s ancient form.

By creating the United States Citizen, the Fourteenth Amendment was able to lay the legal foundation for the creation of corporate “persons” who would later claim all the rights guaranteed under the law while facing none of the criminal liabilities.

In Clearfield Trust vs United States, the Supreme Court finalized the doctrine of modern slavery by establishing that fictitious entities formed by legal charter, such as corporations, are “persons” under the Fourteenth Amendment, giving them all the rights of natural-born Sovereigns and the immunity intended for sentient human beings under the original Blackstone Commentaries.

During the first fifty years after the amendment was ratified, there were only a few cases brought by freed slaves under the Fourteenth Amendment.  There were hundreds brought by corporations.

Unfortunately, the enfranchised citizenship had the opposite affect on natural born people.  Instead of being free human-beings subject only to God, they were now acting as persons created by the government.  And the governments of the union, which were mere servants of the people before the amendment, gradually incorporated.  The states began to capitalize their titles in all documents, and every case prosecuted in the courts were now brought by the corporate entity, rather than the people.

The Corporate United States became the Master, and the people – the original master – became the slaves.

Thus, the Fourteenth Amendment, instead of granting freedom to the slaves, merely granted them “free range” while also enslaving all of the free people, white and black, into the new, modern form of slavery.

The people began to rely on the corporations, private and public, for all of their basic needs.  Governments became sovereign and the people became slaves.

It did not take long for the new modern form of slavery to manifest its true nature.  Governments began to require the parents of all new-born children register with the Birth Registration Act, a method of creating title for property.  A private national bank was established, the Federal Reserve Bank, who would agree to loan the government money in exchange for the future tax receivables due under the new Income Tax Amendment. How would the government prove futures?  Birth certificates.

If you look closely at your birth certificate, it is clearly a commercial instrument, such as a deed to a house or a title to a car.  It is printed on bond paper with thermostatic ink.  If you copy it, the words “void, void, void” appear, signifying the copy holds no commercial value. Even your parents are not given the original.  Why, because they are not the owners.

Where does the original go?  Take a guess.  It goes to the Secretary of State. It is all “business.”

The Secretary of State issues bonds which certify the number of new births.  The bonds are then pledged to the Federal Reserve bank as collateral (proof of the number of taxable slaves) for money, which they create out of thin air.

However, just like it would be fraud for you to steal a car and use the title as collateral for a loan, the government, also, is perpetuating a fraud by failing to disclose to you material facts regarding what your birth certificate is used for.

Since the day of your birth, you have been a slave.  Through subtle trickery and fraud, they have cohersed you into agreeing and acquiescing to this fraud.  Governments all over the world have adopted the same method of tyranny. You have the right to choose which master you work for in the form of a “job.” When you became old enough to contract, you reaffirmed your slavery by signing the Civil Service form sent to you in the mail, where you unknowingly checked the box and signified you are a “United States”  citizen.

But you are not.  You are a free, sentient, sapient, blood, bone, and flesh, living being who was created by God, not the government.

If this makes you angry, it should.  Because the only way to get free is to first get angry.  But hold that thought. You are about to get angrier.

In Black’s Law Dictionary, they have a word for you – Stromineus Homo

L. Lat. A man of straw, of no substance, put forward as bail or surety.

ShareTweetSharePostSharePin It!
chevron_left “We want to write!”
Did Jesus Truly Exist? chevron_right