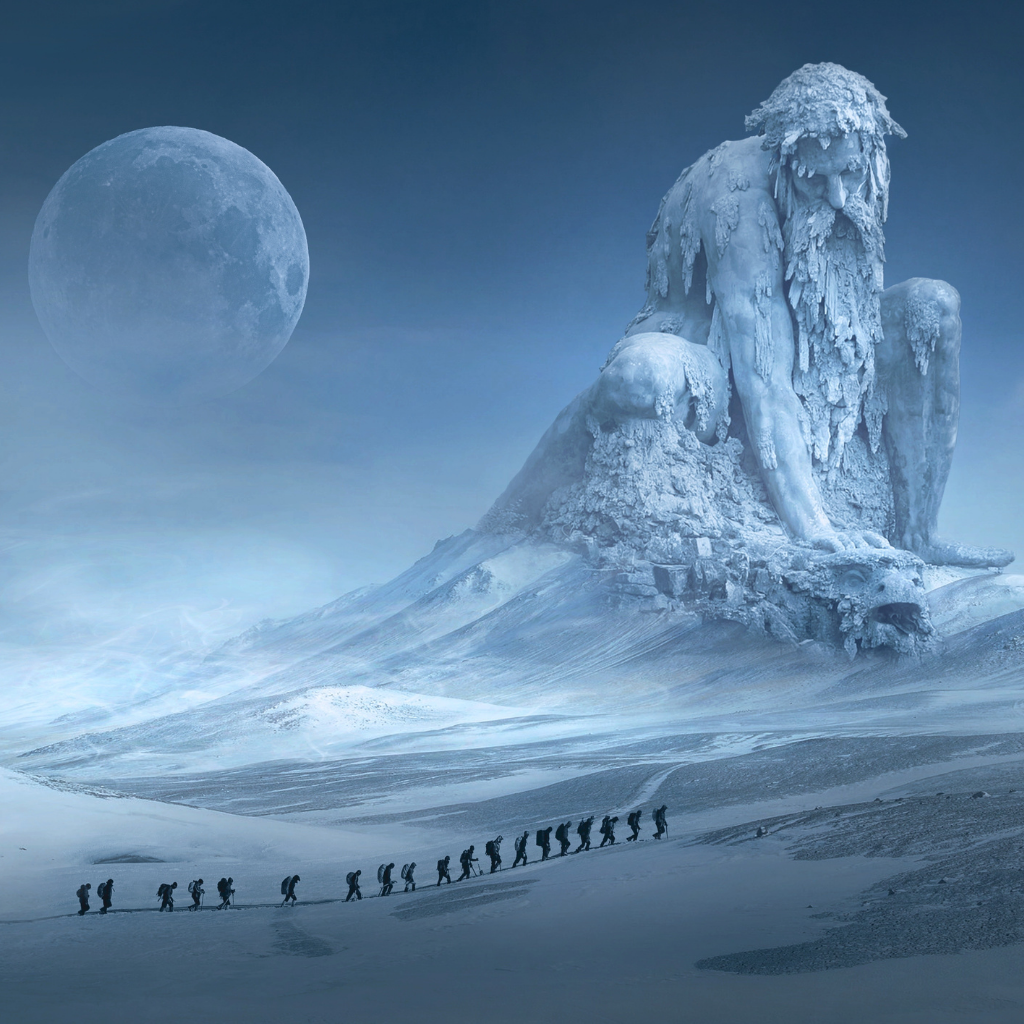 The story traveler’s eyes became distant, still moist from his tears, as the axolotls gazed upon their host in wonder. Teshi’s inner guard dropped, slightly. She was surprised by the sudden display of vulnerability in this visitor who, in all appearances, seemed more like a god than a sad old man. She listened with intrigue as the Story Traveler continued…

“You see, I have been waiting a very long time, hoping and praying that I would meet the soul who would cause that flame to turn blue,” he said.

The axolotls traded looks with one another at the table. It was Teshi who spoke, this time. “You mean one of US caused that,” she asked.

“Indeed,” replied the old wizard with a smile. “And the fact that you did has monumental implications. You see, as you already know, I am the Story Traveler. Some call me the The Wizard of Wik, which you will soon come to learn. I have been tasked with guarding the story realm, and guiding it; and I have been searching for your story for a very long time.”

The wizard perceived confusion on the faces of the axolotls, but was not surprised. “I know, I know. It is all very much to take in. But do not worry. As I tell my story, you will understand.”

Skipper squirmed in his seat, but settled back as he raised his hand. Holding a finger in the air, he paused, then lowered his hand into his lap. “I think I know what you are referring too,” he said. “But, please, continue.”

The wizard smiled at the elder axolotl. “You were a friend of Enoch, were you not,” the wizard asked Skipper. “He mentioned you.”

“Hold the phone,” interrupted Axol. He shot Teshi a look, then returned to the traveler. “You know my pa?”

“Yes, yes, I do. And do not worry, he is alive and well, and you will see him sooner than you think.”

The wizard’s eyelids creased as he reassured his guests. “I have come to do this very thing, young friends. But I’m afraid this quest of mine requires some preparation. It is my duty to make sure you are all well-informed of the risks before you agree to my proposal.”

The wizard paused and drew a deep breath as he studied the faces of his guests, then continued. “And please, bare with me, blessed souls, as this is the first time I have ever told my story….”

“You see, it is important that you know who and what I am, and believe in my quest. Not only for yourselves, but for all the axolotls, even the ones who were not transformed; and, indeed, if you accept my quest as your own, your story will become a two-edged sword, piercing into the hearts of many more. And in order to believe, you must know…”

“A long time ago, I made a promise to a king, that I would guard the stories of mankind. You see, there is a darkness which constantly rages against that which is good and whole, that which is love, and light… and life.”

It all started ages ago, in a world much like this one — the realm of the great Anuchians. At the center of all life there is a story, and after many thousands of years, the Anuchians overcame their dark stories, evil forces of greed and hunger for raw power, conceived in the hearts of those who desired it.”

“Endless wars were fought between the forces of good and evil, and, eventually, good triumphed. And the very first completely balanced world came into being, enjoyed by a society who had learned to respect one another, and love one another. They learned the secret of a universal law known to the Anuchians as “Wik.”

“This enlightened generation came to be known in the anals of history as the ‘children of wik,’ and they continued to thrive for thousands of years. They overcame death and disease, hunger and plagues, greed, hate, malice, and all the things you see humans dying from today. There was none of it, for they had abolished it through love and knowledge.”

Little did they know, however, that there was one among them who held secret anger and resentment towards the children of wik, one whose heritage came from the old order, who they had allowed to dwell among them, believing that their love and kindness could cure him.”

“Then, one day, for the first time in thousands of years, death returned to the Anuchians…”

“You see, until then, the only way an Anuchian could die was from battle, but the great wars of the first age were long gone, and death had been purged from society; but then the righteous king, Alar, bless his soul, was found dead in his chambers.”

“Nobody knew how he died, but a great counsel was organized to discover the cause of his death. The entire planet was shaken to it’s core, and there was great fear amongst the Anuchians — fear which led them to place someone in power who exploited that fear to the utttermost.”

“It was the beginning of the end of an age, not only for Ahn La Krane, but for a multitude of worlds. Zarwik convinced the Counsel that Alar’s death was caused by the first human murder. That the effects had rippled throughout the 5th dimensions. So, they sanctioned a mission to earth, and sent Zarwik here with seven of his powerful sentinels. But his intentions were never to discover the cause of the tragic death of Alar.”

“He knew there was a mineral on this planet which would make him very powerful, so he murdered Alar, seized power, and convinced the Children of Wik to send him to earth. Once here, he used his dark stories to control the leaders of men, forcing then to mine this mineral for him, that he could use it to multiply his power in many worlds. And this he did, and his power here spread throughout the fathoms of space, the effects of which reached even unto Ahn La Krane and the minds of the Anuchians.”

“His true purpose was discovered, and the Children of Wik followed him here, determined to bring this rogue to justice. But he had grown far too powerful. Before they could reach earth, Zarwik unleashed his weapon — a great wall of darkness which sent this dimension into a quantum entanglement, the invention of his own mind — an entanglement not even the Children of Wik could escape, for, indeed, they, too, found themselves transformed, forced to meek out their existence on this planet, a world controlled by his own dark stories.”

“Thus began the Paradox of Zar and the evil monetary system among mankind. Every man, women, child, and creature of this world became trapped in his 5th dimensional paradox — reduced to nothing more than mere instruments of Zarwik, forced to mine his gold for centuries. Even to this day, every ecosystem on this planet; and, indeed, on many others, suffer from the pollution and plagues caused by a frivolous race to earn one’s own bread, a disease which has enslaved every soul…

“Every soul but one.”

The Story Traveler lowered his head and his countenance dropped. Shame covered his face as he continued…

“I was the first human being to be recruited by Zarwik and his sentinels. Indeed, I was unaware of his true intentions. I watched as the sentinels took human wives; and cringed at the sight of the creatures they birthed — human in all appearances, but different inside. This was how they bred their priesthood — a ruling class of kings and priests — storytellers to perpetuate their agenda in the earth.”

“I even helped him recruit the first laborers; and oversaw the construction of the Chamber of Secrets — a great pyramid, capped with solid gold — the weapon he used to alter the very thread of time.”

“It was in there, in this chamber, I encountered the spirit of the anuchian King, Alar. He told me Zarwik’s true purpose, and that his children would be coming. He told me they would be defeated, and that someone would have to survive the coming darkness, learn the knowledge of Wik, and return his children to their rightful place.”

The wizard’s eyes dropped to the table and focussed on the candle; and his voice became quite. “He placed something inside me that day,” he whispered, as he pointed at the candle. “And he gave me this…”

The axolotls followed their visitors eyes to the flame of the candle as the Wizard continued.

“When Zarwik released his weapon, it should have engulfed me in the same illusion; but instead, it transformed me into what you now see. I was transported into the nether realm of possibilities, quested with searching a multitude of worlds for his lost children. Time became irrelevant to me, and so did space. Since that day I have searched thousands of dimensions and hundreds of worlds, diligently watching for the story which would kindle the sapphire flame of the children of Alar. I have mentored kings, queens, and empowers — futile attempts to manipulate various outcomes and timelines in order to cause their whereabouts to surface — but it has all been in vain.”

“But then I found your father.”

Skippers eyes were quarters. Teshi felt a strange tingling travel from her lower spine to the top of her gills. Axol had tears in his eyes as the meaning of the travelers words sank into his mind and spirit.

“That day in the chamber of secrets, Alar told me I would know them by their stories. He revealed to me the secret of inter-dimensional travel among mortal beings. Through stories, it is possible to pierce the chasm which separates paradox from reality, travel to distant realms, and communicate with the folds of destiny.”

“Your father’s stories reached my ears through the void, and I instantly knew what had become of the lost children of Wik. You may recall the very story — the one about the axolotls trapped in the mirky water…”

“But Zarwik and his sentinels hindered me; for, they, too, knew very well who you are. Therefore, my attempt to restore Enoch was thwarted by that same weapon, for the sentinels have grown great and powerful; and they intercepted me…

“What happened to him,” asked Axol — But the Story Traveler had seen the question in his eyes before it was voiced…

“He was intercepted. But I know where he is, and I need your help.”

The wizard saw the concern on the faces of the axolotls. “Do not fret,” he reassured them. “He is safe now. But we must move quickly.”

ShareTweetSharePostSharePin It!
chevron_left Space Axolotls: The Wizard
A Platform for our Posterity chevron_right