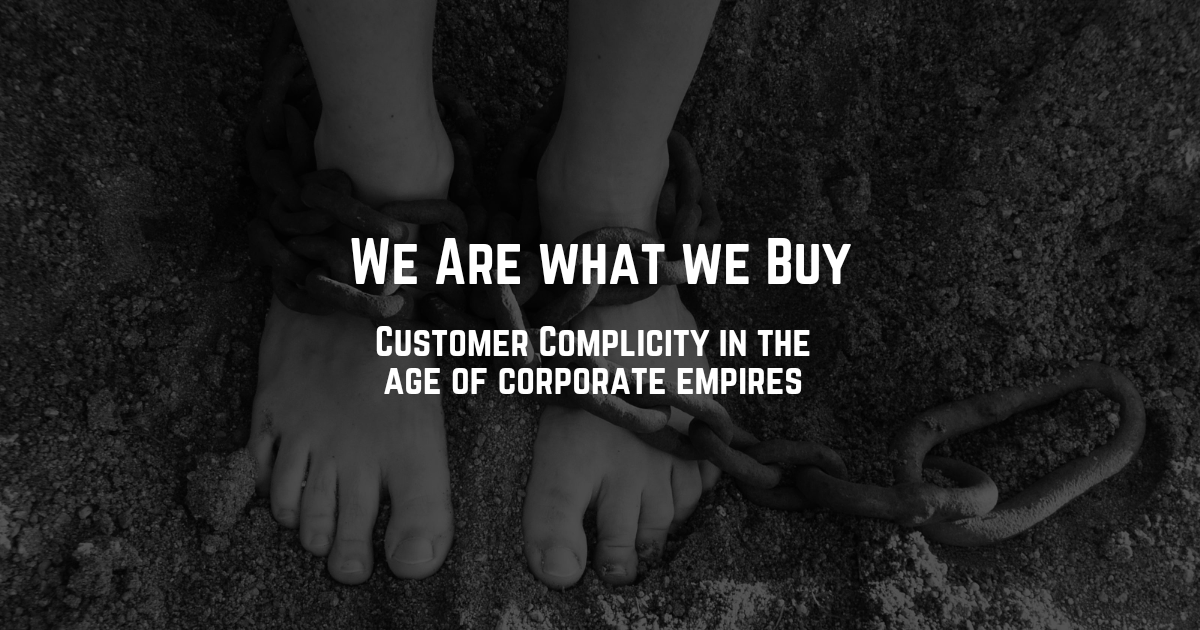 Customer complicity in the age of corporate empires.

This article seeks to examine whether the customers of a tyrannical organization are complicit in the crimes of the organization; and

Whether a strategic and conscience-driven mass boycott can be an effective force for change.

Every dollar they spend on such campaigns comes from their customers.

If it is true that a crime against any human-being is a crime against all human-beings, should we hold the customers accountable when they continue to buy from the above companies after learning about their intentional use of slave labor in order to increase their bottom line and establish market-dominance?

Shall we continue to enjoy the convenience of the features of their products after learning those features were built with the help of forced slave labor?  If so, where is the human concern?  How are we any better than the slave-owners of the early American Empire?

Take Amazon, for example.  We now know that slave labor is involved in the manufacture of the Kindle Notebook, and that company funds were used to assure anti-slavery whistleblowers were sent to prison. (China Labor Watch). When we make a decision to support such practices by allowing our books to be published and sold on Amazon and Kindle, how are we any different than the person holding the gun to the heads of the poor people in China and forcing them to work for free?

We enslave those people with the casual transfer of money.

There are organizations who have dedicated their lives to investigating and fighting slave labor. Despite all their hard work, they are powerless to effect change if they are not backed by a large number of buyers willing to withdraw their customer-loyalty from such companies.

And as long as Amazon is assisted by writers, authors, and publishers willing to publish on Kindle, they will continue to oppress and dominate the entire market, shut down small publishers, strangle small websites and apps, and employ slave labor in the manufacturing of their products.

The hope that politicians will be able to stop such practices is unrealistic as long as the political process itself can be bought through lobbyists.

The only recourse true humanitarians have is to implement the Strategic Big Tech Boycott put forward by Wikacy App and our mission.

For twenty-four hours, users who visited Wikacy.com from an iphone were greeted with this message:

“Wikacy App is no longer available to users who support the use of forced slave labor by Apple, Inc.”

When the iphone user clicked “ok,” they were forwarded to this article, which lays out in undeniable detail the fact that Apple, Inc. knowingly employs slave labor in their supply chain and spends millions of dollars lobbying against laws in China as well as the U.S. which would prevent them from doing so.

We did this to demonstrate how even small apps such as Wikacy can do our part to take a stand against crimes against humanity such as these. If we were to deny iphone users access to this small app, which they have grown to love because of our true-human support for small people and our user-owned business model, we would lose half of our user-base. Very few people would be willing to convert to Android at the drop of a dime just to be able to access this small app.

But what if our network was as large as Facebook or Instagram? We have seen all the corporate apps block, deny, and censor accounts and businesses who promote ideas against their political agendas, but when have they ever used their censorship powers to stand against other large companies’ crimes against humanity, such as forced labor? Never.

It is time for people to accept responsibility for what we choose to buy, which apps we choose to use, and how we use our purchasing power. We no longer live in a disconnected world. We are in the the heart of a great war of ideas such as the world has never experienced, the weapons of which are digital. Whether the next generation inherits a world oppressed by non-democratic corporate empires is up to us.

The dream of Wikacy is to leave the world at least one app which is owned not by corporate oligarchy, but by the users; where human-rights is the main goal, free speech is assured, and where users vote with their conscience. An app to serve as a check against unbridled corporate power, where the small voice receives the same exposure as the large ones, and small accounts the same rights as the accounts with millions of followers. We are the only app which does not make the acquisition of users the main goal. We only seek the remnant of true, passionate world-changers who will act on their conscience.

We do not hesitate to declare to the world our intentions of creating a platform where sellers can sell for free, authors can publish and sell with zero fees, and developers can create apps and digital services for the true benefit of human-kind. We do not intend to partner with platforms such as Amazon and Apple, but to overthrow them with a user-owned business model and render them irrelevant. We do not seek to earn profits for our legally-registered entity, but to create a way our users can earn and distribute profits amongst themselves to counter the ever-increasing oppression of a top-down money-based system.

We hope that one day, we may have a user-base comprised of individuals who will delete any account, return any product, and boycott any company who we, as a community, declare to be in violation of the Rights of All Human Beings.

We realize this is an ambitious goal, therefore, until that day comes, we will continue to allow iphone users to access Wikacy. But we will not publish Wikacy on any of Apple’s platforms until they cease their use of forced slave labor. We will not be complicit in their crimes.