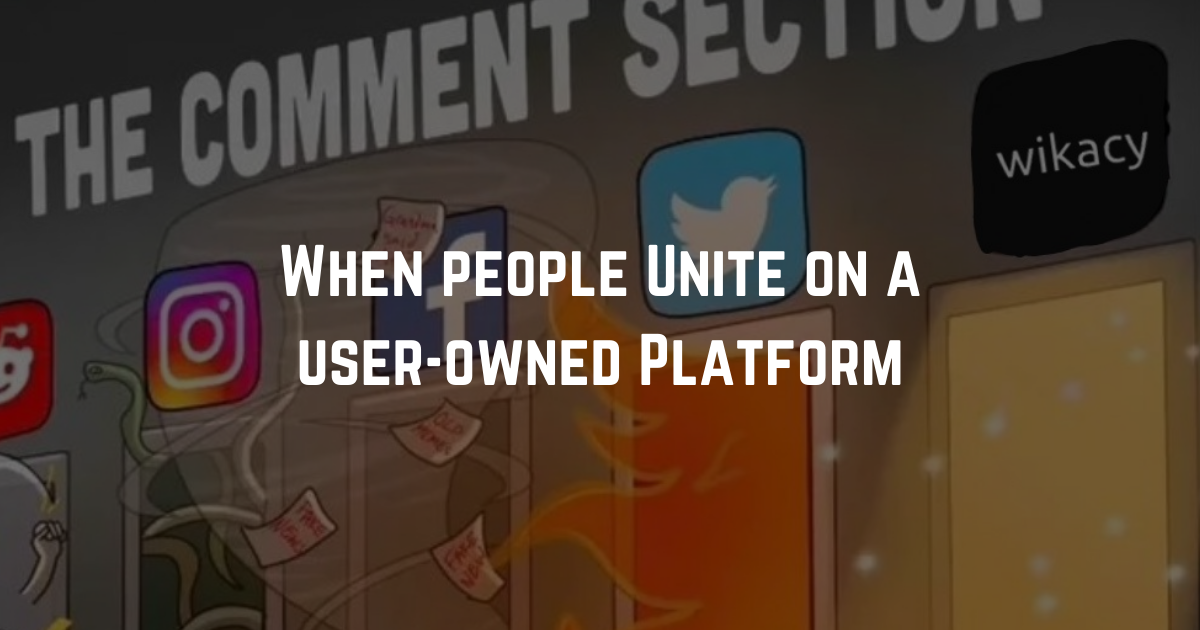 This post was inspired by a meme posted in our news feed by Jonathan Fry, one of our newest members.  It had such a profound affect on me I just had to make this post.

The meme displays an image demonstrating the conflict and divisions of the comment sections of corporate owned social media, then, in contrast, a heavenly light descending from Wikacy feeds.  This brother has only been a member for a few days and, like others, has had the opportunity to experience the difference.

And there is a big difference between comments on corporate social media and comments in Wikacy, where our entire purpose is to support one another and build one another up.  The concept had me pondering the phenomenon for quite some time, causing questions to arise within me, such as what causes people on Facebook, Twitter, Reddit, and other sites to be so hateful and divisive.  As someone who has been fighting the corporate algorithms for some time, I have come to the conclusion that social media intentionally divides people.  This has even been publicly proclaimed by various whistleblowers who, like us, have noticed what is going on. When I saw this image, it made me, most of all, wish to recap some of the very positive things which have been accomplished by our members.

This is what happens when people unite:

For one, we have self-published author Barbara Vokatis and her beautiful golden doodle, Carmel, who, since joining Wikacy, has published her very own therapy dog mobile app for Android.  While the app is still public beta, still this is a monumental accomplishment. Everyone who has ever published their first book will tell you what the accomplishment feels like.  And to think any normal person can publish their own app and acquire the ability to reach billions of users is a thought which does not seem realistic to most people.  But Barbara has done it, and she now has a community of artists, writers, and developers to support her and help her change millions of lives with her message about the benefit of using therapy dogs in schools.

This is what happens when people unite.

Next we have Clever Pennywyze, who has been passionately using Wikacy docs to write the most beautifully told story about an entire galaxy.  What took J.R.R Tolkien years to do, Pennywise has nearly matched in a matter of months!  And this is not because Wikacy has any special features which other apps do not.  Our docs are basic and simple.  No, from her own words, it has been the support she feels from our members, who enjoy her docs everyday and offer feedback and encouragement, which has inspired her to write so much on Wikacy.  And any author knows what a monumental task it is to get a rough draft of a story out and onto paper.  Pennywyze has created something here which I believe will become one of the greatest works of fiction ever experienced, and I am not just saying that.

This is what happens when people unite.

For myself, I could go on and on about how Wikacy has inspired me to reach for the stars.  The possibility of a platform owned by the users is the most world-changing idea ever conceived.  When something is collectively owned, every person is motivated by a strong desire to create great value for themselves and for others.  You will find no trolls or shills in Wikacy –  not because of any software or anti-spam security, but because of the simple fact that such people have no interest in taking on a people who are united in support for one another.

So be encouraged, writers of Wikacy! You are the pioneers of a new era in human history, where the media we create on this platform is used to distribute a message to the world that all people can set aside their differences and unite with a single goal and for the benefit of all humankind.

If you are new here, we encourage you to reach for the stars! Together we can harness the power of true human support to help you achieve your dreams!